One of the oldest professions in history is stonemasonry. Which basically refers to the sourcing, mining, sorting, cutting, processing, and shaping of stones. We have become so used to mechanical and industrial production methods in the modern times, we often become oblivious to how civilization began with manual labor and effort. Stonemasonry is one of those primary professions where manual labor and effort was given. Not that manual labor has become totally obsolete, but modern technology has reduced it to great amounts. 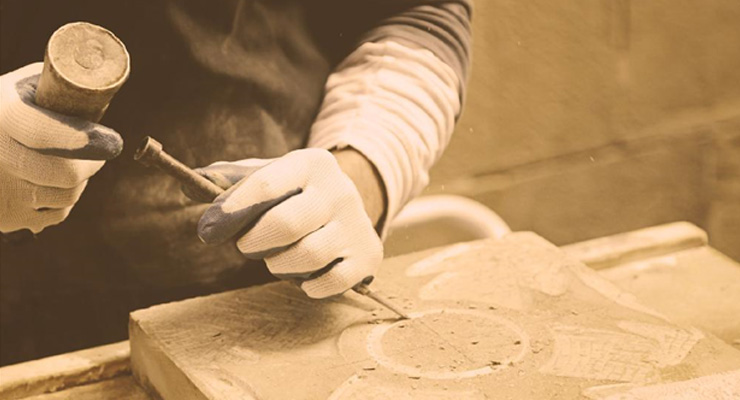 Stonemasonry is a great form of art. Stone was shaped into useful utensils and other tools for everyday use, namely lighting fire and hunting in the early ages. It was somewhere in time, around 6000+ years ago men started to build tools for shelter, survival and hunting. Over time, humans became more and more skilled and started to make advanced weapons, tools, utensils and materials. Complex designs and shapes were coming into play and then they slowly began incorporating stone in building structures. The world still has some of the most prolific creation from stone – The Pyramids in Egypt, Inca Temples in South America, many Roman and Greek architecture, medieval cathedrals in Western Europe and from a later time – The Tajmahal in India.

Towards the beginning, calligraphy was a form of stonemasonry which was the act of engraving messages on stones. This is one of the first major forms of communication as the scriptures and drawing engraved in stones could carry information to the next person who views it. Egyptian hieroglyphics was an advanced form of stone masonry which flourished later on.

There were three types of stonemasons. Master, apprentices and journeymen. The apprentices were taught by the masters for several years until they learned the art. Journeymen was the middle level of skill set from these three. Journeymen were the people who had completed their apprenticeship and was allowed to travel or take ‘journey’, hence the name. Masters were extremely skilled at their art and raised apprentices. Masters were free men and could travel to anywhere in the world to complete their work. Many renowned stone masons carved their signature into their creations to leave a mark.

As time went, technology and civilization became more and more advanced and machines made the work much easier, but the core work of stone masonry is still present. For a long period of time, the same type of tools like chisels, mallet, hammer made from stone itself were used for stone carving until about 150 years ago. However, there are people who still use old and prehistoric methods and tools alongside modern tools and they believe that it will remain for more centuries to come.

Superior Marble and Granite have done an amazing job! The marble is beautiful and the service was great. I highly recommend this company! Thanks so much guys 🙂

Awesome service, they were so patient with us especially with all the building delays. Amazing job stone looks great throughout the house in each of the rooms. Thanks heaps guys

Thank you so much for the phenomenal job that you did with the custom stone top that you made for our bathroom vanity. It looks even better than we imagined! Your customer service is fantastic and we are extremely happy with your services. We will definitely be back when it is time to start the kitchen!

Thankyou Nicholas and Andrea for doing the best job, my bathroom and kitchen have made my place look a million dollars, your skill and knowledge and helping me decide exactly what to use and colour was exceptional. Thankyou to you both and your team

Excellent service and communication throughout the job, strongly recommend this company.

Review us on Google plus